The entire idea behind solar panels for home use is to take the tremendous energy from the sun and convert it into a form that we can use – usually electrical energy. We can then use the generated electricity to run our home appliances, heat our homes, power our lights, and run anything else that requires power. 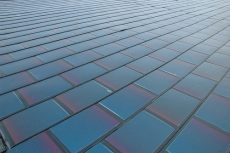 These solar shingles are just an
example of the new style solar panels for homes.

Ten years ago, in order for home solar panels to be effective, it was required that they be placed in a region of the country that has lots of sun. And also it was required that they only be placed on the side of the home that received the most sunlight. That’s because even though the sun generates unbelievable amounts of radiant solar energy, the solar panels of the time were only able to convert a small fraction of that energy to electrical energy.

Not only that, but the power companies in some communities will actually allow you to sell excess energy that your solar panels generate to the utility companies.

Home solar panels and solar roof panels can be especially good for off grid areas such as in rural areas where it is either impossible or prohibitively expensive for the local utility company to service.

Solar panels for the home are good for the environment as well. Although, certain political forces are in almost complete denial about the existences or causes of global warming, climate scientists have no doubt whatsoever. But, hardly anyone can deny that using solar power has a beneficial effect on the environment. The sun is a great source of renewable energy. And much like wind power, solar power systems produce almost no pollutants, and allow you to significantly reduce your negative environmental impacts on the planet.