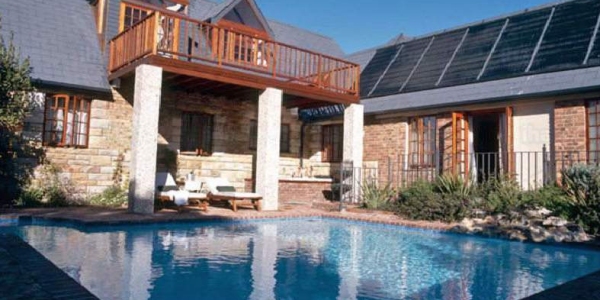 A pool solar panel, as you might expect, heats the pool. Such a passive heating system based on the pool solar panel architecture can also help to save you thousands of dollars on your pool heating bills over the lifetime of the pool.

As an example of the types of savings that can be had, the Port Royal Sound is exhibit A. The Port Royal Sound is an ilnet of the Atlantic Ocean, found in the Sea Islands Region in South Carolina. Located in the beautiful area is a villa community called “The Spa on Port Royal Sound”. It houses over 250 one and two bedroom villas that many wealthy people use as second homes. The Spa has a large indoor swimming pool which costs $13,000 a year to heat (for 6 months of the year). They recently installed solar hot water panels to heat the pool at a cost of $18,000 (for the entire year). The installation of the pool solar panels is expected to save them that $13,000 a year and to completely pay for itself in less than two years.

But you don’t need to have a hotel sized pool to make it worth while. A pool solar panel can be purchased for a pool as small as a recreational home pool or as large as Olympic sized swimming pools. And in some cases as in the example above, a pool solar panel system will not just lower your heating bill, it may virtually eliminate it.

How Do Pool Solar Panels Work?

A passive solar pool heating system is based on heating the water in the pool and exposing it to heat generated by a series of solar panels that have been exposed to sunlight.

Flat plate solar collectors are the cheaper of the two. But, although cheaper than the evacuated tube solar water heating collectors, they are not as efficient. This type of collector also requires more surface area to collect its energy. So if you live in a part of the country with long winters and don’t typically get a lot of sunlight, this is probably not the best type of collector for you. 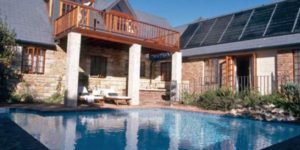 Evacuated tube solar water heating collectors are more efficient in their ability to collect energy. This makes them the preferred choice for cold weather climate. This is also the preferred type of collector for those that simply don’t have the roof space or other surface area that flat-plate panels require. But be prepared to pay more for this type of collector.

The two types of solar pool heater panels collectors also work in different ways. The flat plate solar collector works by circulating cold water from the pool filter or supplemental pump, through the panels, and finally back into the pool where it returns warmer.

The evacuated tube solar collector works a bit differently. The pool water is not pumped through the solar collector. Instead, clean external water is heated and recirculated in a closed system. The heat from the heated water is then transferred to the pool through some sort of a heat exchanger.

As you might expect, the evacuated tube solar collector will have a longer lifespan because it never comes into direct contact with the harsh, chemical filled, pool water.